Eclipse Engineering, Inc. > Blog > Seals > The Advantages and Disadvantages of the Channel Seal
Subscribe to Our Newsletter

The Channel Seal (or Cap Seal, as it’s often referred to), was one of the earliest forms of Polymer or Teflon sealing in the seal industry.

The product is easily applied. It didn’t replace the O-ring, but instead offered improved life while reducing drag.

In doing so, hydraulic and pneumatic systems operated cooler and quieter, while improving overall performance of the product.

Evolution of the Channel Seal

Before the Channel Seal, the Backup ring was established. The first Backup rings started out as leather, as this material was readily available and could be easily formed into any shape with simple dies to stamp the Backup ring out.

Back up rings provided support for the O-ring, allowing the O-ring to operate at higher pressures, while closing off the Extrusion or “E” gap. This stopped the O-ring from being nibbled in the extrusion gap, there-for extending the life of the O-ring.

Teflon Backup rings were a big improvement, as they would better fill the gap and would stay put (as opposed to leather, which tended to shift in the groove). With the use of two Backup rings, an O-ring was well supported from pressure in both directions.

It was a simple matter to connect the two Backup rings with a thin membrane of Teflon, which removed the O-ring from the sealing surface. This change reduced drag and improved performance, while still maintaining an excellent mechanism for extrusion resistance.

This design was relatively simple to machine out of Teflon, but installation was a challenge, as the Backup rings were full depth. This caused the seal to become distorted during the install process. Today, we almost never see this type of design. 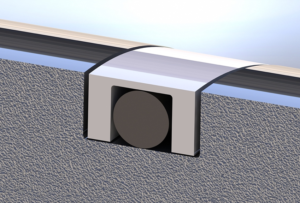 With CNC machining, the ability to nestle, and an O-ring design in a complex Teflon shape gave rise to what is referred to today as the Channel Seal, or Cap Seal.

This style seal offers an abundant of advantages over standard back-up rings and the early version of the Channel Seal, which was simply a Backup ring with the membrane of Teflon in-between.

The Advantages of the Channel Seal

The Channel Seal incorporates Backup rings that protect the O-ring against extrusion. The seal’s non-rubber contact patch reduces drag, thereby reducing friction. The overall system heat is also reduced due to this much lower friction.

Fillers can be added to the Teflon to improve wear and extrusion resistance. And, above all, installation is greatly improved over a standard duel back up rings as this is combined in the seal package.

For extremely small applications, grooves may need to be split. But there are tools available to help kidney the seal and a resizing tool may be used to bring the ring back to its original shape.

Typically, the seals may be installed with no tooling. Their thinness allows them to be smoothed back into shape.

In the event the thin web cross section wears out, the seal reverts to an O-ring, with two Backup rings to help continue to support it.

The Channel Seal has been heavily employed in the aerospace industry. It’s also found a home in control systems where friction and drag in pneumatic systems are extremely important.

Cons of the Channel Seal

Like any Teflon seal, leakage is not as good as a simple O-ring. But due to the extremely thin membrane, the Channel Seal has leakage just above the leakage of an O-Ring.

Surface finish also needs to be a bit better than an O-Ring, but in either case, finish improves leakage and drag, while improving the wear live. Finishes of 8-16 Ra are generally very acceptable.

The Benefits of the Channel Seal

The Channel Seal can be designed to fit nearly any O-Ring groove, as its CNC-machined to fit your specific hardware. With a slightly deeper groove, the web thickness can be increased to improve wear life with little change in leakage.

Overall, given the Channel Seal’s extreme flexibility and ease of installation, it can easily fit most of your O-Ring sealing needs with no change in hardware.

Eclipse Engineering has a full standard line of Channel Seals, and can custom manufacture to meet your very specific needs, including sealing on an angle or face style seal. 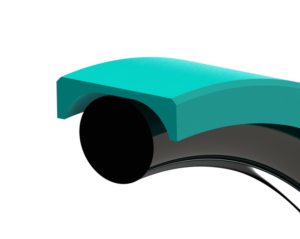 Discover the advantages and disadvantages of the PTFE O-ring »