Eclipse Engineering, Inc. > Blog > Seals > The Revolution from Plastic to Teflon Seals
Subscribe to Our Newsletter 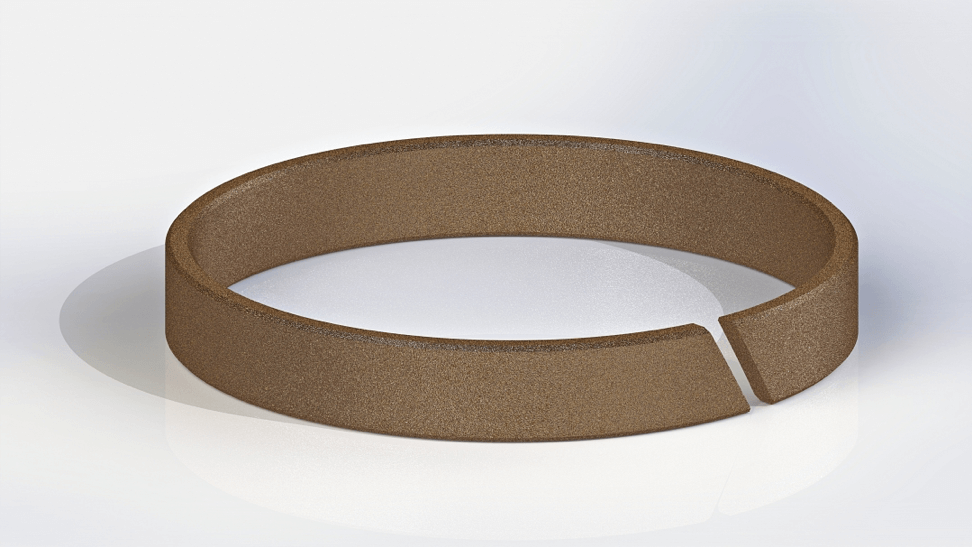 The term “plastics” is generic way of describing a synthetic material made from a wide range of organic polymers. Organic polymers describes a man-made substance that is formulated using polymer chains to create what we commonly refer to as…(you guessed it), plastics.

Before plastic, leather had been used to create Backup ring devices behind O-rings. Leather allows fluids to be retained, providing lubrication for the O-ring when the system was running dry.

The problem with leather was that it could become dry and shrink away from the sealing service, exposing the elastomer to same pressure it was intended to protect against.

With the advent of polymers, a piece of plastic could be cut or formed into the exact shape to allow for zero extrusion gap, and for continued protection for the O-ring.

Some polymers were very brittle. Since they needed to be deformed to allow for installation into solid glands, the cut of the plastic could nibble at the O-ring, causing premature failure of the element it was supposed to be protecting.

The Revolution of PTFE

When PTFE moved out of the lab and into industrial use, it quickly found itself adjacent to the O-ring. PTFE offers extrusion resistance and, at the same time, doesn’t erode or nibble at the O-ring due to the “softness” of the polymer.(Hardness between 55 and 65 Shore D)

Given the composition of PTFE, or Teflon, it was that PTFE could be utilized as a sealing element to protect Backup Rings and conform to the shaft. The bonus was it was generally easy on shafts (depending on the filler added to the PTFE).

There are some negative aspects to Teflon that needed to be overcome by early engineers. First, it has a fairly high rate of Thermal expansion which, by its own nature, could often times lose contact with the sealing surface. This meant some kind of loading was necessary to ensure contact.

PTFE is as tough as other polymers, so the fact that it could seal on a shaft made it vulnerable during installation for tears or nicks on sealing surface.

Second, if it were stretched during installation, the material had to be sized back to its original shape due to its poor elastic properties.

The Benefits of Teflon as a Sealing Element

So what makes Teflon such a powerful sealing element?

Teflon’s low coefficient of friction also makes it an excellent wear ring. Teflon has a compressive loading of around 1000PSI, but because it’s not a rigid body, the load can be spread out. This spreading out of the load eliminates point loading that’s often found in a new bronze bushing.

As bronze bushing begins to wear on one side, it wears and creates an egg-shaped profile, spreading out the load by wearing into this “egg” like shape. If the load moves around from a shaft, this same process of spreading the load out begins over again. Eventually, enough of the bronze is worn away, and the bearing must be replaced.

Coefficient of Thermal Expansion for Teflon

At 77 °F, the coefficient of thermal expansion for Teflon is 7.5×10^(-5) in/in/°F. This means that when we design a bearing strip, it’s designed at room temperature with a gap.

This gap is designed with the knowledge of the thermal rate of expansion, and how much of a temperature change we’re expecting. By designing in the proper gap, we never completely close the bearing strip. And at lower temperatures, the gap is small enough that we still get excellent bearing coverage.

With the coefficient of friction being so low, .04ƒ, Teflon makes a very slick surface to run rods or pistons on. By using Teflon in our sealing and bearing elements, we keep friction in the system to a minimum without adding heat into the operating system.

PV, or pressure times velocity, gives us an indicator as to how well the material will survive in the operating conditions. We won’t go into the calculation, but with the understand that staying within the PV limits gives the design engineer some boundaries to work around.

This becomes especially important in Rotary seal applications, where a small amount of pressure and high velocity can easily cause the lip seal to exceed the mechanical strength of the polymer.

The Engineers at Eclipse Engineering have been designing canned rotary lip seals for over 20 years, and are well versed in the application of these constraints in your sealing application.

Canned rotary seals can take on many forms, from simply injection molded rubber into a can to a spring energized seal with a built-in scraper in a can design. These are some of the areas where polymers like PTFE or Teflon do an excellent job of handling high PV with long life.

Rotary shaft hardness and roughness are important considerations when selecting the right PTFE lip seal. Read our guide to avoiding seal failure by getting optimum performance and longevity for your seals and shafts »