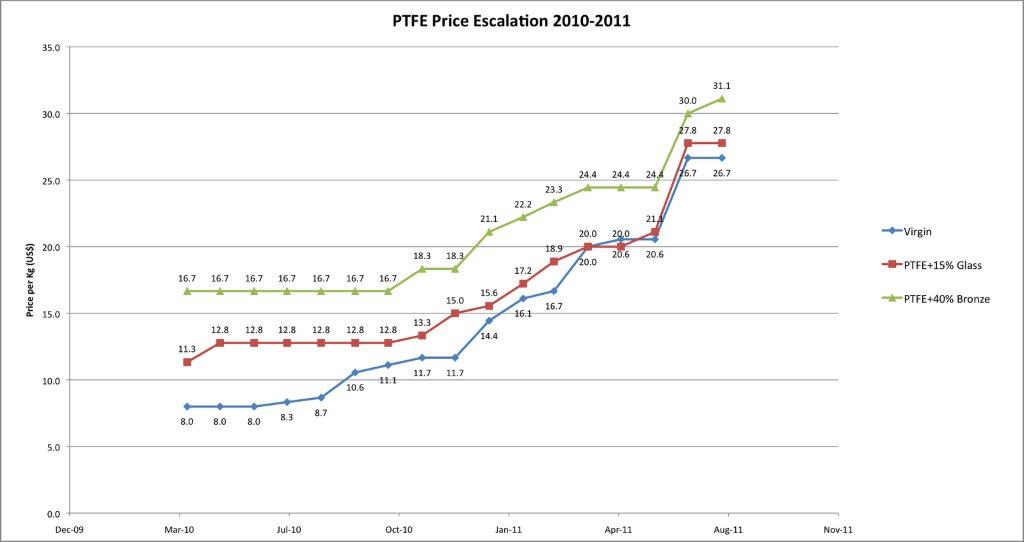 Over the last 12 months, Eclipse has seen exponential increases in raw material costs used in supplying you with the quality parts that are expected from us.

Historical pricing for Virgin PTFE had remained fairly stable until July 2010 when it began a steady rise from $8.00/KG to $26.70/KG in July 2011. This represents over a 200% increase in a one year period. The graph pictured below shows glass and bronze filled PTFE along with Virgin PTFE depicting these trends. PTFE is traded as a commodity on a worldwide basis so while there may be spot buys at favorable pricing,  overall pricing remains fairly consistent worldwide.

This kind of increase raises flags to those who see its immediate impact in their finished part pricing and has them asking why.

Flurospar is a mineral component required in the production of PTFE. There is currently a worldwide shortage of Fluorospar which has had a direct impact on PTFE pricing akin to an oil pipeline being shut down and seeing a near immediate increase in the cost of gasoline at the pump. The second factor is a bit more subtle. Pricing has been stable with little or no increase over the last 5-8 years. The industry had been absorbing some of these costs through a reduction in margin do to market tolerance. We believe there have been some opportunistic pricing that has been used to return margins back to previously sustained levels for the resin suppliers.

Relief for the rise in raw material cost can only come if the level of Fluorospar production is increased by opening new or dormant mines. We would be happy to provide the down hole seals.

PTFE is a material that is extremely difficult to replace because of the many favorable properties it exhibits. Few materials can match its broad range of uses and necessity because of the chemical resistance of its very slick properties. It has its niche and generally when you’re using it, there is a very good reason.

As a manufacture, the percentage of material cost in the piece price of a final part has risen substantially, while labor remains nearly unchanged.  There may be added improvements in manufacturing to offset this increase however it is generally seen in the production of higher volume jobs while the middle to small volume customer bears the full brunt of this increase due to the percentage gain.

In the end, while we at Eclipse engineering have done everything in our power to absorb previous increases and find new ways to manufacture parts in a more effective manner, these increases in raw material costs will begin to make a bigger difference in the pricing of the final product, which unfortunately you have already begun to see. We do believe we may have seen a leveling off at this point and hope that some stability will return to this market. We continue to push for the most competitive pricing from our suppliers and do expect pricing to decrease as supplies rise and refill the supply chain.

For more information on this subject you can visit:

PTFE increases in the gasket world

Thank you for your continued support.