Eclipse can provide long-lasting composite bearings for any application — even water park attractions.

This case study explores an Eclipse seal and parts solution for an attraction at the Denver-based water park, Water World.

Water World approached Eclipse with the need for a new type of bearing to increase the longevity and reliability of the wave machine parts.

The wave machine uses a hinged ‘paddle’ hydraulic swing in a swimming pool to make gigantic waves for tubers and swimmers to enjoy.

The paddle had bronze bushings, which has traditionally been a common material for these pieces of equipment.

Apart from friction-induced wear, the main problem with the bronze bushings was point loading.

The rigidity of the bronze bushing and trunnion (hinge) pin meant the contact pressure between the two parts was on a concentrated line where they pressed against each other. This pressure caused premature wear of the bushing.

The bushing is also flexible and spreads the contact load between the trunnion pin and bushing, which avoids point loading.

This form of bearing spreads the load around approximately 40% of the bearing surface.

The composite material also had the advantage of being self-lubricating in water, with a low friction coefficient. The combination of these features minimized wear on the bushing significantly.

The design of the Eclipse retrofit bushing is shown below: 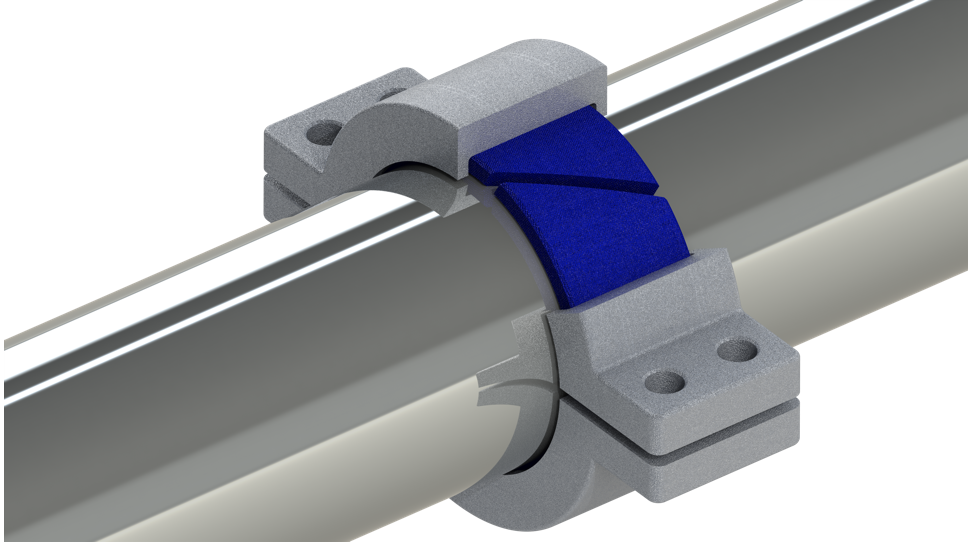 The bushing is depicted in blue, exposed by cutting away part of the grey clamp to show the diagonal slit that allows expansion and contraction.

The new bushing lasts 4-5 times longer than the old bronze bushing — instead of needing several bushings per year, it’s now a matter of years per bushing.

Eclipse has access to an extensive array of bearing materials that can be precisely optimized for a range of both underwater and dry applications.

Primary examples are trunnion pins for bridges and dams, due to their ability to handle high loads without point loading.