Much like aerial drones and unmanned aircraft, submarines and underwater vehicles have advanced similarly in recent years.

Improvements in lithium battery capacity and efficiency have led to increased usefulness of unmanned, undersea vehicles by extending their range and operating time. Consequently, size and weight of the overall vehicles has been significantly reduced.

Oftentimes, fully instrumented submersible vehicles can be small enough to be lifted and handled by a single person. This drastically reduces operating costs by eliminating the need for large deployment ships or launching cranes.

Advancements in software and sensor development have also led to an increased number of autonomous vehicles employed in the field.

With the ability to operate independently, AUV’s eliminate the need for any kind of hardline tether or direct communication with a pilot on the deployment vessel. This greatly extends their range and reduces operating costs.

AUV’s have seen growth in usage across a wide variety of industries due to these recent advancements.

Commercially, the oil and gas industry has made extensive use of AUV’s in seafloor surveying.

Properly mapped areas not only detail new potential off-shore drilling sites but can also help identify efficient routing of pipelines and other infrastructure, both reducing costs and environmental impact. Existing pipeline inspection is also more frequently being done by AUV’s.

Scientists have also employed AUV’s for use in a number of oceanographic research functions, ranging from microbial life surveyance to ocean temperature monitoring.

AUV’s also find extensive use in military applications such as intelligence/reconnaissance, as well as underwater wreckage location and recovery.

With more AUV’s in service and their capabilities increasing, the demand for better sealing performance is also intensifying.

Eclipse was approached by a leading AUV manufacturer looking for a better seal to be used on the vehicle control fins.

Located at the rear of the vehicle near the thrust propeller, two sets of fins pivot to control the up-and-down and side-to-side direction of the vehicle. They are actuated by electric servo motors.

Repeatable and consistent functionality of the fins is critical for precise control of the vehicle. A UAV may be used to survey a large portion of seafloor, where’s required to maneuver in a specific pattern.

This is to completely cover a geological grid of interest. Without accurate steering capability, the AUV’s usefulness will be limited.

The customer was looking to extend the depth capability of their current AUV. With increased depths comes increased external pressure, which is an obvious concern for the sealing systems — more specifically, how the pressure affects the friction of the seals.

All seals will be pressure energized to a degree, and many common seals are specifically designed to allow the external pressure to help provide sealing force and energy.

While increased sealing force is great for providing leak-free seals, it comes with the adverse effect of increase friction at the interface surface. In fact, this is exactly what the customer was experiencing with their current sealing configuration.

Due to the increased water pressure, at a certain depth, the friction around the shaft of the control fin was great enough that the servo motors were unable to pivot the fin. The AUV would effectively be out of control.

To go to extreme depths, some vehicles use a pressure balanced system. This is where the internal pressure of the vehicle — often filled with oil — is made to be similar to the external water pressure. Thus, the pressure differential across the seals is very small.

While an effective solution, it is also costly. The customer didn’t want to change their internal components, so this was not a viable option.

Increasing the size or torque capacity of the fin servo motors was also not an option. With power and space being in limited supply on a submersible, the customer could not afford any additional power consumption for increased torque to counteract the friction.

Eclipse was challenged with creating a leak-free seal that also met the customers stringent friction and torque requirements.

Eclipse knew seal material selection would be the first major area to address. When friction is of chief concern, a PTFE-based seal material would seem like a good choice.

Eclipse knew from experience that a PTFE material would likely not meet the near zero leakage requirement sealing water on a relatively rough shaft surface finish.

On the other end of the spectrum, a softer urethane material would no doubt seal very well, but the coefficient of friction would be too high.

Eclipse chose its EH042: Thermoplastic Elastomer as the seal material.

Thermoplastic Elastomer (TPE) has a coefficient of friction halfway between a typical PTFE and Rubber or Urethane. It inherits the high sealabilty of the softer compounds without being too high in friction.

Eclipse knew this would be the perfect seal material choice for tightly controlling water while keeping torque requirements to a minimum.

Unlike many rubber compounds, EH042 also has the added bonus of not being susceptible to explosive decompression. In underwater applications, this provides an added level of reassurance that sealing integrity will be maintained even in emergency surfacing situations.

While the seal material alone would have been a significant upgrade to the customer’s current seal, the improved properties of the EH042 would not be enough to meet the very low torque requirement.

Eclipse turned to the physical design of the seal itself. In rotary situations where torque is very sensitive, a Canted Coil Spring Energized Seal is likely the best choice.

The unique properties of the Canted Coil spring lend themselves to very precise friction control.

Unlike Cantilever spring or O-Ring energizers which exhibit a largely linear load versus deflection relationship, Canted Coil has the characteristic of a near constant load over a wide deflection range. This means as the spring becomes more compressed the load does not also increase.

This distinctive property is very useful in seals where friction due to loading needs to be finely tuned, as the can seal can be designed to work in the constant loading range.

Eclipse chose Hastelloy® as the spring material for its in-house manufactured canted coil spring. As an upgrade to the standard 300 series stainless steel spring, Hastelloy will provide better long-term corrosion resistance in the saltwater environment. 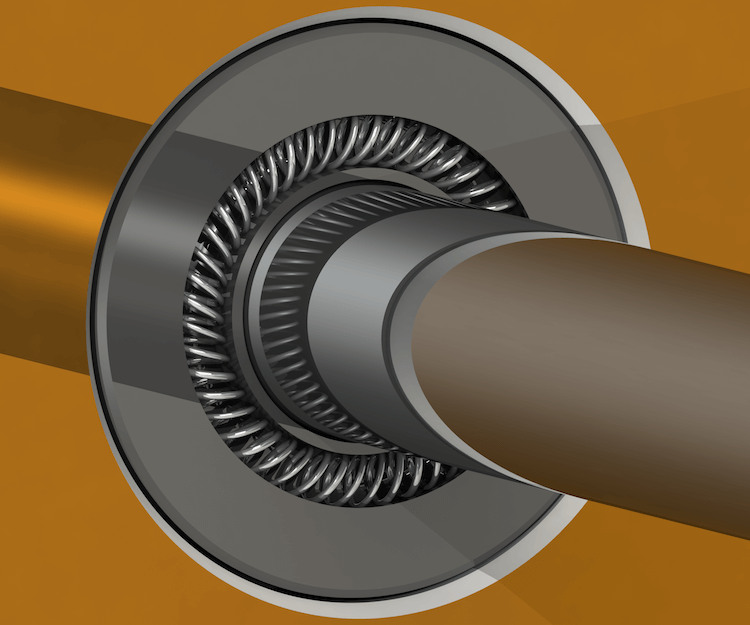 But even with the use of the EH042 material and Canted Coil Spring, a standard type Spring Energized Seal still would not have met the customers torque requirement.

Eclipse turned its attention to the actual seal geometry to look for further improvements in the frictional loading, despite having a relatively large hardware envelope to fit the seal.

Eclipse chose to use one of its smaller spring series to limit the size and depth of the spring cavity within the seal.

Having a smaller area to act upon, the pressure energization by the outside water would therefore be limited.

A smaller series spring of course, has smaller available deflection range to operate in, but Eclipse worked within this limitation by utilizing the careful tolerance control within its in-house machining capability.

The lip geometry of the seal and how it interacts with the shaft mating surface was the next area of focus.

By modifying the machined angles of the lip, Eclipse precisely controlled the amount of surface contact between the lip and shaft.

Eclipse’s EH042 Canted Coil Spring Energized proved to perform perfectly in testing and moved on to be the standard seal for the production AUV units.

All estimates were verified by the customer in real world testing. The seal delivered outstanding sealabilty, while at the same time meeting their very low torque and friction requirements.

The allowed the customers AUV to achieve greater depths without any modification to the fin drive motors or resorting to a pressure balanced system.

This gave the customer a significant advantage over its AUV competitors. It allowed them to secure a larger portion of the marker and increase sales. Not to mention improving the capability of AUV to survey greater depths and gather valuable research information.

Contact Eclipse today if Spring Energized Seals could be right for your Autonomous Underwater Vehicle application.